I subscribe to Runners World magazine. When I started running, I looked for every magazine and book that would give me the info I needed to get better, tips on what to eat, how to stay injury-free, what to wear to stay comfortable. I didn’t know too much about the blogs so I turned to what I consider(ed) a reputable magazine for guidance.

Two years of magazine subscriptions, the Runner’s World Big Book of Marathon training and countless articles later, today I read an article that they released promoting the story of a bandit runner in last week’s NYC Half Marathon. FYI: A bandit runner is someone who doesn’t pay for a race but just runs in the event along with all the other people who have legitimately paid for the opportunity to run.

Road races are often run in public spaces that can’t be closed to pedestrian (or running) traffic but race lanes are usually cordoned off  to keep race participants separate and safe from all the other road users. In Central Park, where the NYC Half began and ended, and on the streets that the route traversed, there were markers that delineated the race course, the NYPD placed barriers and volunteers and police made sure the run lanes were maintained.

But according to the Runners World article, apparently, one lady decided she would disregard the race rules and run the race as a bandit. According to the article, she was at the starting corral and took a selfie and liked the way she look amongst other runners, specifically one male runner in the background, so she decided to run the race and take pics of good looking male runners along the way.

We’ve all seen attractive members of the opposite gender but to break the rules so you can take random pictures of these people is taking it to another level. Further, how much attention would she paying to maintaining safe distance from the runners around her while she was posing for these pics and subsequently, live posting the pics to Instagram.

For the sake of journalistic integrity, I decided to check out this lady on Instagram myself and after I scrolled through the pics, I realized she was INDEED wearing a race bib. Ergo, a valid race entrant, not a bandit after all.
So WHY is Runners World promoting the idea of running bandits then? Do you think it is that they didn’t know? That they would post an article without doing the extensive research that I just did… that is, clicking on all of five pictures on Instagram?

But according to the article, they interviewed  her. So maybe she was a bandit, running with someone else’s race bib, or something else unscrupulous.
Now, we’ve all done things we probably shouldn’t. But then when an instance of bad judgment is validated by Runners World, it gives me pause. Runners World, which recently celebrated receiving 1 million likes on Facebook, and maybe even more online readers and Twitter followers, has now decided to promote bad behavior and give this women the kind of publicity well-meaning, law-abiding social media hopefuls, like myself, have to wait years for and even then, earn legitimately. The question is why would they do that? Is there more to this story that we don’t know.

I don’t like the idea of bandit runners. Many people stood on the sidelines of the half marathon last week(myself included), wishing we could join in the fun, wishing that we had had the foresight to sign up for the race but pledging to do it next time. I’m sure other people thought about just running alongside the runners, after all it’s a public space. Isn’t it? But just because the race is run in a public park, bandits take unfair advantage of what valid entrants pay $$ for and if this runner had injured anyone while she was posing for or posting these pics, it would have impacted the race of innocent runners.

Coming off a year where race security was challenged at the Boston Marathon, and going into a running season where runners are facing even stricter security checks, why even entertain even the idea of bypassing security measures? And why is Runner’s World, a magazine that every month encourages me to pay exorbitant fees to enter races, then reward the very idea (if not the actual act) of bandits with the publicity this controvery is generating? Doesn’t seem right. Feels unethical and biased. Maybe the RW writer was (or knew) one of the “hotties” tagged in these pics. Maybe they’re getting desperate for running news and they’re printing any kind of story now. Whatever the reason, smells like a scandal to me. 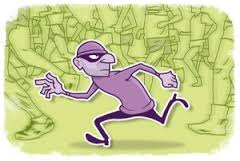 What do you think about this story?