One man’s trash is another man’s treasure. 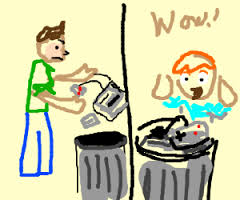 What is junk to someone might be valuable to someone else. In the city, I see this all the time – people going through the recycling containers to pick out the cans and bottles they can put into the machines to exchange for cash. 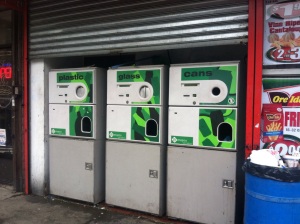 A few days ago while strolling on Manhattan’s Upper West Side, I walked into a local consignment boutique. Beautiful clothes, designer fashions that have been gently used and no longer fit into some trendy fashionista’s closet and which were now being offered at a fraction of the price. The boutique clerk told me how the consignment store works – some lady brings a high-end clothing item in, they agree on the price that the piece is worth now and they put it on the rack. When the clothes are sold, they split the money. The fashionista gets some money back for an item that no longer fit in her wardrobe, and the shopper gets a still beautiful, designer item for a fraction of what it cost when it was on the runway. One (wo)man’s trash is another (wo)man’s treasure.

Maybe you’ve gone to the Goodwill or Salvation Army where their slogan is literally instead of putting it in the trash, give it to us. I’ve been in the Goodwill and seen things in worse condition than things I’ve thrown out, but there’s a market. Someone will buy it for some reason.

Ever been in an antique shop and seen some things that look junky?

Ever watched those home design shows on HGTV and seen those stylists go get some of those junky pieces and sand and paint and change the hardware and transform those same junky pieces into beautiful, new-looking furniture.

One man’s trash is another man’s treasure.

I love decluttering my space but I often hold on to things just because I don’t want to put them in the trash. If you’re like me, here are some ideas to turn your decluttering into an income generating opportunity:

Have you ever found a treasure in someone else’s trash? Do share your story, please.