A few days ago, there were questions, many of them valid. Jamaican sprint superstar, Usain Bolt, has been recovering from a serious injury for a while now. Will Bolt even be able to compete in the 2015 World Championships in Beijing? Will this be the end of the reign of his “Fastest Man In The World” title? Is “Lightning Bolt” finally fading into the thunder?

On Sunday, Bolt defended his title to win the 100m race.

But (the naysayers said) he only won by 0.01 seconds. It appears he’s not as fast as he used to be (the critics said). The truth is, he’s maintained his extraordinary pace for two consecutive Olympics. Not an easy feat to accomplish (those who continue to defend him said, all the while biting their nails and wondering if it was indeed the beginning of the end).

And then today, the 200m event. His favorite race, Bolt has always called it. America’s Justin Gatlin has been promising to win this event for years now. Today was no different. Gatlin said he would win. But Usain Bolt went out and did it. He finished the race with the 5th fastest time ever. But that’s not what counts. What matters is that Bolt’s time was the fastest time in this race. He won! Bolt won! He’s still the champ! http://youtu.be/7JS3wWhj6e8

No shade to Gatlin (well, maybe a little) but it doesn’t matter as much what you say you’ll do – it matters what you do.

Every accomplishment isn’t a competition against others. Most races you’ll compete in, you’ll be competing against yourself. You want to be better than any previous versions of yourself. It doesn’t matter what anyone else does. It matters that you do your best, every time, in every circumstance.

Maybe you’re hurt and your best isn’t your best ever but if it’s the best that you can do today, with the resources you have now, that’s enough!

And if your best happens to make you a world champion, with a gold medal hanging around your neck and millions of people cheering and chanting your name, then that’s just a bonus. 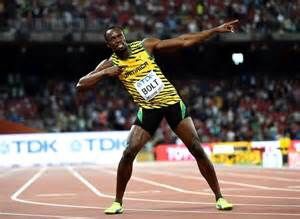 Smile with a Jamaican today. It’s almost guaranteed that they will smile back at you. Today is a great day for us!