It Ends With Us by Colleen Hoover: A Review

This was the second CoHo book that I’ve read so far. Simply put, it wasn’t as good as my first experience of her writing, November 9. True, November 9 wasn’t the greatest story ever told. There were definite problems with that plot too; I just couldn’t think of any while the story was going on. That, for me, is the mark of an enthralling novel. I came away from reading that novel feeling all the emotions I could imagine and then some.

This time, I wasn’t quite as wowed. 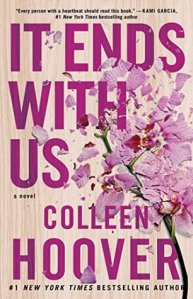 What The Book Is About

It Ends With Us takes place in two eras. Fifteen-year-old Lily watches her father repeatedly abuse her mother. Because the situation is so unpredictable at home, she doesn’t have friends over and she isn’t quite allowed to visit other people either. So when a homeless, older boy starts staying in the abandoned house next door, he becomes her best friend.

Fast forward to Lily at twenty four. Her father is dead, her mother adjusting. Lily has moved to Boston and is finally in charge of her own life. She meets Ryle, a doctor with a bad temper he hasn’t learned to control and his sister Allysa who becomes her best friend after she meets them independently. Ryle is drop-dead gorgeous, a surgeon and he likes her. Win, win, win, right?

Not quite. Because Atlas, the no-longer-homeless-guy is also back in the same town as her and Ryle still has a temper.

What I Would Change

Seriously? Nothing. I can’t think of anything that would improve the story. There were instances where the journal entries written by 15 year-old-Lily seemed way too composed to be authentic. But then I remembered that at fifteen, I was a homebody who read a lot and had an above average vocabulary and written expression too.

I thought Lily’s character wasn’t always consistent but in real life, who is? Who among us hasn’t said one thing sometime and totally done a complete 180 the next minute?

Because i didn’t feel the complete breadth of emotions like I did in my previous CoHo read, I rated this one 4 stars, but 4 stars with explanation.

I’ll be looking out to read another one of her books soon.

Are you a Colleen Hoover fan? Which of her books would you recommend next?