I used to work at a company where we often went out to do field visits. We would don our safety vests and set off in the company car to whatever faraway location we had business at. Often, our trip would last for hours, and we would need to stop for lunch. My supervisor, who often accompanied us on the trip, didn’t mind where we went for lunch. You could eat or not eat. You could bring your own bagged lunch or go to a diner. You could park the car and walk around in a neighborhood. The only thing you couldn’t do: You couldn’t go to sleep. Yes, technically it was your free time and you should be able to spend it any way you want to. But once you left the office in the company car, you became the representative for the entire organization. Essentially, to everyone else, we were the company. Taking a nap or looking like you were wasting time, sent a message to any passerby that we didn’t take the job seriously. That the company didn’t take its responsibility to its customers seriously and all its employees were just snoozing all day.

I learned a lot on that job about perspective. Sometimes, it’s not what you do, it’s how it appears. You could sit in the car, and stare at the same map for hours on end, and to the onlooker, it seemed like you were deep in thought. You could walk around with a measuring tape and rope off the same distance several times, kudos to you because you looked liked you were being a perfectionist. Appearances matter.

On my way to an event earlier this week, I walked by a MTA bus stop. This particular stop is one of those terminal stops – it’s where one route ends and the bus drives a few meters away to pick up passengers to start the next trip. If you’ve been waiting for the bus for a while and you see it coming, you’ll watch it let the passengers off at the last stop, and prepare yourself mentally to get on in a few seconds. You’ll get your Metrocard out, you might even fold up your newspaper or end the phone call you were using to distract yourself as you prepare to get into the bus. If it is raining, you might start closing your umbrella. The bus is coming. All is right with the world.

But when you watch the bus approach the last-stop, see the passengers off and then watch the driver turn the bus engine off and get out, that doesn’t make you feel good. In your mind, it doesn’t matter if the driver needs a break. All you can think is Why do I have to wait for that? Why can’t he take a break at the end of the next route. Why do I have to be the one who is inconvenienced?

This past week, as I walked by on my way to my meeting, I saw this whole scenario go down. What made this particular experience more challenging is that the bus driver in question didn’t get out to take a break. Instead, he turned the engine off, turned the bus lights off and disappeared into the back of the bus to use his cell phone. I wasn’t waiting for the bus and I was angry at what I saw.

In my mind, I know the driver probably needed to take a break and that it takes less time and resources to allow him to take his break right there, between routes than it would for him to leave and go back to the depot and the passengers wait for another bus to come along. That doesn’t make sense. But tell that to my boiling passion as I empathized with the three women huddling at the stop in 50 degree weather, darkness falling on them like a wet blanket, while the bus driver turned his lights off and went to the back of the bus to sit down and make a phone call.

I’m talking to you now, Mr. Bus Driver. It doesn’t matter how long you’ve been on the road. You can’t just stop the bus and not appear to be inconsiderate. It doesn’t matter if you’re tired or hungry, if you have to call your kid before they go to bed. It doesn’t matter what you have to do. We don’t see that. All we see is you locked inside the bus, basking in its residual warmth, while the women stand outside in the cold. Couldn’t you drive a few yards to the bus stop and let them inside and then wait until it’s time to start the route? And if that’s against the rules, then the rules are stupid. Because at the end of the day, while safety and rules are important, appearances matter too.

And that’s my rant of the day. it happened a few days ago but I’m still Thinking Out Loud about it.

Thankfully, all the bus drivers aren’t like this though. Read this post about another time when I met a bus driver who was so friendly that I asked him to take his picture and memorialize his kindness. 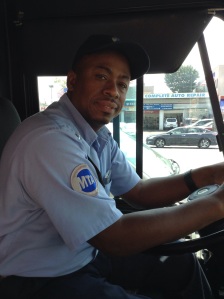