Sixteen-year-old Lucinda Hayes is found dead in the snow in front of the neighborhood elementary school one morning. While the police investigate the usual suspects – the neighborhood ex-con, her stalker and her recent ex-boyfriend – anyone could be responsible, which is why it’s important that the story is told from alternating perspectives. There’s the reality that Cameron sees, except that he blacks out sometimes so his narration is unreliable at best. Then there’s Jade’s perspective except that she is a liar and Lucinda’s rival, so it’s unlikely that even if she knew the truth, that she would tell it. Then there’s Russ, the police officer who’s investigating his first murder and who has not one conflict interest but several.
Lucinda, however, isn’t the only connection between these characters as the narrative traces their connection and for most of the novel, instead of giving clues, only points out how likely it is that any of the characters could have snapped and murdered this popular teen. 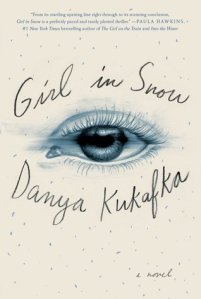 Danya Kukafka’s prose alternates between spurts of brilliance and description of the mundane with sentence structure that don’t always follow the rules of standard grammar. Bonus points for taking creative license; points deducted for it being distracting. There were moments where the age and reading level of the target reader seemed a little ambiguous. Was this a book for teenagers or for adults? With mostly teenaged characters, there were moments when it felt like it would appeal to the Young Adult reader, someone who might list Pretty Little Liars as their favorite book, someone who enjoys themes like the pretty, popular girl finally getting her due. Then there were clear adult themes – marital angst and characters dealing with aging – and quotes from Gabriel Garcia Marquez  and characters reading Pablo Neruda’s poetry in its original Spanish, and the book felt advanced enough to merit the hours spent reading it.
But while the complex characters proved to be quite multidimensional, the author’s way of revealing that layer by layer just became a little irritating over time.
Finally, after about 300 pages, one suspect is revealed as a witness and another suspect, an innocent bystander who wants nothing more than to matter, finds that they don’t, that they are no longer the main character in their own story and the other buildings start crumbling.
Girl In Snow does not have a clear hero or a clear villain, and the time spent on developing red herring side characters and following sub plot lines, could have been invested in refining what might have been a better story. The final chapters were a little anticlimactic and even after the reveal, the characters didn’t feel deserving of empathy or their views, strong enough to change your positions. Interesting but not quite thrilling.

I received a free electronic download of this book from Netgalley in order to complete this review but this did not at all influence my opinions of the story.