Skip to content
Sara Ackerman’s new historical fiction novel, The Lieutenant’s Nurse, starts aboard the SS Lurline, a passenger boat leaving San Francisco for Hawaii, in the days leading up to the Japanese bombing Pearl Harbor in November 1941. On board, we are introduced to Nurse Eva, musing over her regrets about the life she left behind and the man waiting for her at the other side of her voyage. However, what looks to be an ordinary trip becomes more eventful as Eva meets the married army intelligence officer, Lieutenant Clark, whose experience with decoding Japanese communication alerts the passengers to the impending danger. 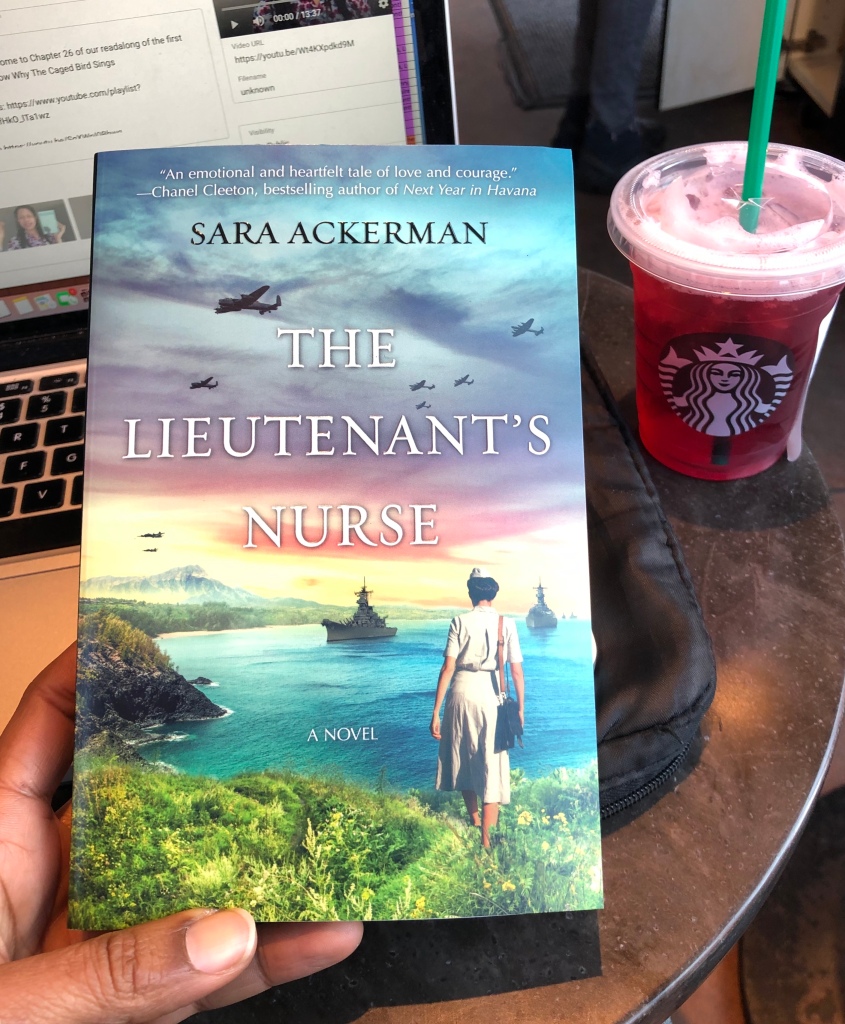 Here is a play-by-play of my thoughts as I read:

Page 56: Eva is a newly-recruited army nurse aboard a ship bound for Hawaii on the cusp of Japan’s bombing Pearl Harbor. It is fascinating to read the characters’ preoccupations in the days before this life-changing event, when they think that the ship being battered by a tropical hurricane will be their worst experience, and while Eva becomes enchanted by a married soldier without revealing her own status, which is…

Page 67: This flashback to the complications of being a nurse in a male-dominated medical field of the 1940s, was really frustrating to read but the author is doing a great job with portraying real issues and the conflicted feelings of the characters, knowing that they had taken oaths to help their patients but that the social order prevents them from doing the best for them.

Page 114: I don’t generally enjoy a love triangle in a novel and Eva’s refusal to tell the Lieutenant about her existing promise, especially when he reveals the truth about his wife, doesn’t endear her to me but the title makes me think that this awkward situation will be resolved and that as the characters embark on the shores of Hawaii, that the Japanese threat will dominate the rest of the story.

Page 152: Now that the characters are in Hawaii, the love triangle morphs, and I’m not sure I like it any more than before. Should I remain optimistic that this resolution will be satisfying?

Page 242: War! Reading from the perspective of the hell divers evoked more complicated feelings, because there is the tendency to think about the story as only being personalized by the characters we are invested in. I admire the way Ackerman threw the readers a bit of a curve-ball.

Page 259: Miss Olson! Someone in Hawaii knows your secret! But who?

This well-crafted, multi-perspective book takes advantage of various modes of storytelling, including narrative prose and intercepted text from intelligence transcriptions during a very important period of American history.  And while there is am omniscient third-person narrator, the reader is also treated to scenes being reported from the perspective of Eva, the young army nurse bound for her first assignment in pre-World War II Hawaii, and Clark Spencer, the lieutenant she meets aboard the ship and who provokes the decisions she was sure she was firm about. The historical representations are interesting and the author addresses various social challenges of the period – the scant regard for even professionally trained women,  and the choice women were eventually forced to make between career and family, but also the severe prejudice endured by minorities, including Japanese Americans and anyone who associated with them.  There were moments when the story pacing felt a little slow and the side characters weren’t always very useful but it all came together to form a delightful read and it was a treat to read the bits of history that the author pieced together to support the petals of a budding romance. I admired the way Ackerman challenged the order of the day and wrote a strong female character, capable of not just saving herself but also taking responsibility for others and ultimately championing over those would squelch her abilities. At first glance, the title might suggest that our main character’s importance would be linked to her associations with men. However, despite that appearance, The Lieutenant’s Nurse is a surprising feminist read in a rich historical background ripe for these unlikely heroes to emerge.

I am grateful to TLC Book Tours and Mira Books for providing me with a complimentary copy of The Lieutenant’s Nurse in exchange for an honest review. All opinions expressed above are my own.