Sarah Stewart Johnson, in her book The Sirens of Mars, recounts her experience as a planetary scientist traveling to largely uninhabitable parts on Earth to better understand the challenge of exploring Mars. But while that alone makes for scintillating content, the focus of her book is on chronicling the studies that have yielded the 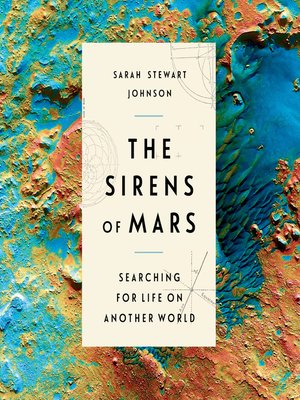 information we have gleaned on the red planet thus far, the labor of love from the researchers who facilitated these missions, both interplanetary and earth-based, and what the Mars data reveals about Earth’s present and future.

The Sirens of Mars treks through the centuries to trace the history of hypothesizing and disproving various theories about the potential of Mars, the innate limits to exploration and the innovative genius that tried to overcome those limitations, the science required to build the spacecrafts and the evolving modes of exploration in the Space race, a virtual competition between NASA in the US and the Russian teams vying to be the first to land on and pioneer the territory. In thrilling narrative-nonfiction style, Johnson offers biographical sketches of major players like Carl Sagan whose mentor blackballed him and Wolf Vishniac who died on a mission in Antartica but left behind a bag of desert stones for a fellow scientist which later revealed that life could survive within rocks, yielding a brand new field of study aimed at understanding the limits of life on Earth. Other stories that are just as engrossing and informative introduce Schiaparelli, Flammarion, Percival Lowell and a scientist named Pickering who sailed to Jamaica in 1911 to view the night sky from a high plateau in the mountains there and proposed that the canal-like observances visible on the Mars surface with the technology available then, were, “marshes teeming with life in an otherwise silent landscape”. As his conjectures were later disproved and replaced by better-informed ones, so Sirens records the collaborations and rivalries that plagued the relationships between contemporaries meanwhile they worked on their own individual giant leaps for mankind. Eventually, Johnson also incorporates her own memoir, sharing her story as a female scientist in a formerly male dominated field, projecting the future of the search for life on Mars but also the more inclusive future for life on Earth. And it is this reflection of what Mars reveals about Earth that is truly the theme of this book – the evolving motives, the changing research methods, the shifting focus to utilize new data. In the prologue, Johnson writes,

The story of Mars is also a story about Earth: how we’ve sought another stirring of life in the universe, and what that search has come to mean. Mars has been our mirror, our foil, a telltale reflection of what has been deepest in our hearts.  With so few landmarks, guideposts, or constraints, all is possible: without data that could be used to cabin our inquiry or limit our imagination, Mars has been a blank canvas. And tenderly, our human seeking has rushed to fill it.

Although The Sirens of Mars is heavily scientific, Sarah Stewart Johnson is careful to write for the average reader and explains all the technical jargon at first use so the book is easy to read regardless of the reader’s experience with the topic. The tidbits of life beyond the telescope moor the narrative to an easily relatable space even as the book describes otherworldly adventure that is perhaps out of the scope of personal experience for most potential readers, but definitely enjoyable to experience vicariously. High praises for a book about science that gives credence to the scientists, and teaches novel concepts while it shows how various disciplines merge to elucidate previous findings and create a springboard to acquire future knowledge. Yet, through it all, The Sirens of Mars remains at its core, an immensely enjoyable read.

Some of my favorite quotes from the book

Note: I received an free electronic download from Penguin Random House and Netgalley in order to complete this review.