Dapper Dan is not just an icon in the Harlem community, but his life, as a metaphor for the community, reflects its hutzpah and resilience, his memories uncoiling to reveal a heyday long gone and hailing a new, replacement dawn in its wake.  Daniel R. Day shares his recollections in a new book entitled Dapper Dan: Made in Harlem and reading this memoir is like running a finger along an African American timeline marking the second half of the twentieth century and beyond. Day introduces his family, migrants from the south, his mother from the South Carolina Geechees, both parents hopeful young people when they arrived in New York like the hordes of blacks who were part of the Great Migration during that time, armed with big dreams and not much else, some hanging on on to dreams, long after they were deferred, and even when they became nightmares. The author describes those experience as they were told to him, and even shares his own poetry that reflects his understanding of his parents’ attitudes towards the dream they passed on to their children. 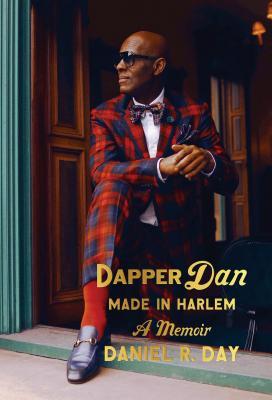 Dapper Dan: Made In Harlem is a gritty rehashing of Day’s youth, a lifetime that included selling and using drugs, gambling, credit card fraud, embezzling funds from his corporate job to invest in the drug trade and the cycles of crime and punishment that he and his peers got involved in. Yet there are some hopeful themes that emerge even in the darkness of his recollections – his strong bond with a father who showed his children another, more honest way of life, and didn’t abandon them when it took several tries for the lessons to stick, Dap’s own spiritual beliefs and a code of ethics that honored how he treated even his hustler friends. The descriptions of unconditional love ripple through the memoir, and make this a truly exceptional read.

The book is written in a very conversational tone, and “Dap” gives the lowdown and skinny on not just his dark past but also shares little-known or vaguely remembered highlights from Black celebrity news of the 1980s through the early 2000s. To add to all that, he describes the birth and development of his groundbreaking fashion business and overlays that with a tapestry of cultural exposé that is as entertaining as it is revealing.

I loved every aspect of this book. Having lived in Harlem for several years and learning just enough about its indigenous culture during that time to whet my appetite for more, I enjoyed Dapper Dan’s stories about his own family as well as the rise and fall and rise again of the predominantly Black New York urban community. Dap maintains a strong connection with the story and its intent throughout the book, never sinking too far into criminality or glorifying the dysfunction but also not whitewashing his past. This book will make an excellent resource for anyone interested in Black culture and art, specifically with fashion as a medium of expression, but this will be equally enjoyable for anyone looking for the true story of one man living out the dreams of his forefathers the only way he knew how.

Note: I received a free electronic ARC from Penguin Random House in collaboration with Netgalley. I was not otherwise compensated and the above represents my honest review.