To read Cosmos: Possible Worlds is to be taken through the range and breadth of time as we now know it – past, present and future – learning to see through clearer lens and acquiring clarity on topics that previously may have been too dense to be understood by anyone outside a highly specialized space program. In this aesthetically appealing and encouragingly easy-to-read book, Author Ann Druyan uses simple language and draws clear parallels to make science approachable. She sheds light on the dark corners of space travel so that reading Cosmos  might make the reader ask, “Why didn’t I think of that before?” so relatable is the content that you could possibly think you might have come up with it on your own.

Starting in the prologue, Druyan traces the path that she and her late husband and collaborator, Carl Sagan took toward understanding the infinitesimally small size of our planet with respect to the rest of the universe and set about filtering that scientific perspective to those who might not have studied science as a career but have an interest in exploring the world around them. And at every point, Cosmos  is written with that every(wo)man in mind, formatting astronomy and rocket science and archaeology and art and medicine into basic terms and making the science approachable and fun to learn. 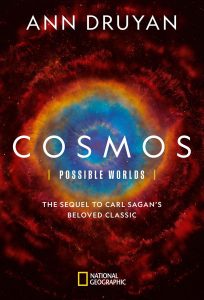 She employs tools like the Cosmic Calendar which correlates the 13 billion years of recorded time to a calendar year and uses that scale to make conversions and show the relative passage of time. Then when Druyan refers to a cosmic event happening on August 31, the casual reader can immediately pinpoint that event in the passage of history.

The stunning full page color photographs and artist renderings that illustrate Cosmos make a perfect accompaniment for the tangible and imagined-but-not-yet-identified components of the science being discussed in Cosmos  and Druyan’s explanations in the footnotes clarify the differences that show there is still a world yet to explore, potentially including the reader.

As a curious reader who isn’t yet certain how science matches up with my religious beliefs, I appreciate the deference with which Druyan approaches various scientists’ understanding of God, from Huygens who was excommunicated by the Jews for challenging the idea that God exists everywhere but that He doesn’t care about your daily habits, to including Biblical texts from Isaiah. The book acknowledges the patriarchal depiction of male as neutral gender in historical artifacts but also highlights the feminine references that can be drawn from ancient and contemporary records. Such an evenhanded approach is definitely commendable.

Cosmos: Possible Worlds is the kind of book that makes you happy to be a reader, rewards your curiosity with not just answers but a resurgence of passion to ask even more questions, and the sense of belonging to a community, a generation that can build on what has already been understood to make things even better for the generations to come.

I highly recommend Cosmos: Possible Worlds for such a reader.

Note: I received a complimentary copy of Cosmos: Possible Worlds from National Geographic Publishers and TLC Book Tours in order to complete this review. I was not otherwise compensated and the above review reflects my genuine enthusiasm for the book.

This sequel to Carl Sagan’s blockbuster continues the electrifying journey through space and time, connecting with worlds billions of miles away and envisioning a future of science tempered with wisdom.

Based on National Geographic’s internationally-renowned television series, this groundbreaking and visually stunning book explores how science and civilization grew up together. From the emergence of life at deep-sea vents to solar-powered starships sailing through the galaxy, from the Big Bang to the intricacies of intelligence in many life forms, acclaimed author Ann Druyan documents where humanity has been and where it is going, using her unique gift of bringing complex scientific concepts to life. With evocative photographs and vivid illustrations, she recounts momentous discoveries, from the Voyager missions in which she and her husband, Carl Sagan, participated to Cassini-Huygens’s recent insights into Saturn’s moons. This breathtaking sequel to Sagan’s masterpiece explains how we humans can glean a new understanding of consciousness here on Earth and out in the cosmos–again reminding us that our planet is a pale blue dot in an immense universe of possibility.

ANN DRUYAN is a celebrated writer and producer who co-authored many bestsellers with her late husband, Carl Sagan. She also famously served as creative director of the Voyager Golden Record, sent into space 40 years ago. Druyan continues her work as an interpreter of the most important scientific discoveries, partnering with NASA and the Planetary Society. She has served as Secretary of the Federation of American Scientists and is a laureate of the International Humanist Academy. Most recently, she received both an Emmy and Peabody Award for her work in conceptualizing and writing National Geographic’s first season of Cosmos.